Supplier and Operator Perspective: A Conversation with Sacoa’s Sebastian Mochkovsky

Cover Story - Sacoa Keeps the Focus on Family and Quality 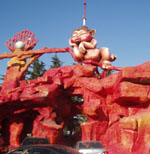 Located 800-metres above the city of Tbilisi, Georgia, Mtatsminda Park has been a popular fun spot for generations and this September moved up a gear with the opening of East Europe’s newest theme park. Two months later, however, the fun came to an abrupt end. Owen Ralph meets the project consultant who describes the new park facility as one of the most beautiful he has ever worked on and assesses its chances of it re-opening in 2008.

John Ellis was sat in the management block one November morning with the park’s local staff. The 25-year leisure industry veteran had set-up the amusements at Mtatsminda Park almost from scratch and just presided over nine trial Sunday openings, attracting no fewer than 80,000 guests.

One of those guests was a man that had visited six times with his children. On Monday, November 7, however, he returned wearing a mask, accompanied by an armed military unit that had been instructed to take control of the park. Although no reason was given, the exchange was civil and John and his team left the property without resistance.

The surreal turn of events was in marked contrast to the violent scenes witnessed in the centre of Tbilisi later that day, when protests against the Government where broken up by police using tear gas and force. The Georgian capital was suddenly a much less fun place to be.

In the days of the Soviet Union, Mtatsminda Park was once noted as the third most-visited public park in the USSR, Gorky Park in Moscow being number one. It featured a similar mix of open spaces, recreational pursuits and a handful of Soviet amusement rides.

Keen to up the ante and present a theme park fit for the 21st Century, the Georgian oligarch Arkadi "Badri" Patarkatsishvili identified a 20-hectare development area within the 50-hectare park. Via his company Lynx Ltd, he set about transforming this into an oasis of fun to balance his “serious” business interests.

Bardri had made his money from former states assets such as the Borjomi water company, Telenet communications and Standard Bank, but Mtatsminda Park, says John Ellis, would be his way of “giving something back to the people.” He also owns the broadcaster Imedi, whose TV tower was already a fixture of Mtatsminda Park and has since been incorporated into the amusement park’s logo.

Various names were considered for the new park: “Everything from Fun Land to Fantasy Land to whatever you can think of,” says John, “but we were sat there with the client one day and said ‘why are we changing the name? It’s famous.’ So we just kept it as it is and created a new logo.”

One might say Mtatsminda Park is now infamous, much like the man who gave it a theme park. The protestors that were attacked in the centre of Tbilisi on November 7 were not the only ones keen to make their views about the Government known. In fact, with his television and radio stations behind him to do so, Badri has been a particularly vocal opponent of the ruling National Movement Party, and is now standing as a rival presidential candidate in Georgia’s January 5 elections.

Although a clear reason has yet been given as to why the park was seized, two high ranking officials of the Tbilisi City Government (TCG) appeared on television soon after and claimed that Lynx Ltd had defaulted on lease payments and failed to invest the amounts required, claims the company denies. ”While the lease agreement calls for investment of US$5 million, in reality to close to US$25 million has been invested to date,” said an official statement on November 9.

Either way, John Ellis is clear why the park became a target. “Along with the television station, which was also raided, it was a big icon for Badri, and it got at him.”

Trading as Leisure Consultants, John became involved with Mtatsminda Park in late 2005 after two previous advisers had failed to shape the project to Badri’s liking. When he first visited the site, in the winter snow, the British-born consultant was taken with what he saw: “It was just crying out to be developed. I thought it was like heaven, a destroyed heaven, but the potential was there from the word go.”

John’s role was all encompassing. Other than some early masterplanning, most things still needed attending to. “The infrastructure was totally shot, we installed new electric, gas water, drainage, sewerage – everything was put in or replaced, apart from the trees, which were stunning. I was probably the only person with any experience of the amusement industry in this project and as such had do all the management training, operational set-ups, ride commissioning, marketing, the lot.”

John brought in ex-Blackpool man Terry Harley as his ride maintenance manager, and was lucky in choosing the rest of the staff too. Though he didn’t speak the language, he knew there was something special about one candidate who applied to be head of food & beverage. He turned out to be an ex-regional manager for McDonald’s in Ukraine. The man that would become the park’s general manager, Irakli Sasania, was in fact recruited from a local children’s hospital, but was soon inducted into the amusement business when John called on another of his old friends back in Britain.

“I phoned Colin Bryan one day at Drayton Manor and asked if he fancied doing a bit of on the spot training. I told him the staff were from Georgia. ‘In America?’ he asked. ‘No,” I said. ‘The other Georgia, and none of them speak English.’ But Drayton went ahead with it and they were great. One thing I couldn’t do was prepare the staff for what it’s like when Mrs X is in front of you and little Johnny wants to go on the ride and you’ve told him it’s not working today. Drayton really allowed these guys to interact with the public.”

The results paid off. “Terry [Harley] went round and made a list of what needed fixing before we opened and he said it was incredible, he had never seen a more polished operations team like it. These guys were smart, attentive and so pleased to be working there. They were not just taking care of the guests, they were serving their brothers and sisters, that was the key.”

The park opened on September 2, the first of a series of trial Sunday openings designed to test not just the reactions of the public but also to ease the staff in gently. “Every Sunday, there would be something new, whether it be a new ride, a café of whatever,” says John. “This way we could really acclimates a management that had never run a park before.”

The highlight of the Mtatsminda Park offering is a flume ride by Interlink that makes good use of the hillside surroundings and weaves in and out of the trees. “If you were a park developer and you wanted to build a park from scratch you would have killed for those trees,” says John.

Choosing the ride’s was fun, and really allowed Badri to indulge his dream. “We put a tender document to all the manufacturers and then the bids started coming back,” explains John. “So we got all the catalogues together and sat there one night and picked the rides. He loved it!”

With the budget capped at US$30 million, there wasn’t much left over for anything else, but one area of the park where money appeared to be no object was some of the guest facilities, such as washrooms, overseen by Mrs Patarkatsishvili. “We changed the tiles three times,” recalls John, “from white to pastel colours to dark oranges/browns. Badri’s wife clearly wanted the toilets to be to the same standard as in their home.”

The abundant greenery was put to good use with the buildings too, some of which wrapped around trees. A fantasy style was adopted for much of the architecture, and the park inherited its own mascots by resurrecting a cartoon character and his friends from an old Georgian television series.

A regional flavour was also given to some of the cuisine offered inside the park, of which there is plenty, a bakery and barbeque pumping out enticing smells. Eating is a popular pastime in Georgia and, quite aside from any revenue-generating opportunities, it was felt important to provide plenty of places for parents and children to sit and eat in a country that still cherishes its family values.

With the exception of secondary spend items, including food & beverage, gifts and ride photos (by Picsolve), guests use a Sacoa card system to pay as they go inside Mtatsminda Park. “It’s a great system,” says John, “it eliminates so many fiddles and allows us to keep complete control. Guests buy points, but we also encourage them to give us data like their cell phone numbers. I can decide to have a happy hour on Wednesday afternoon, for example, and within five minutes send a text message out to potential guests.”

A partnership deal with a local phone provider gave John instant access to 46 sales outlets throughout Georgia. He also managed to raise additional funds through sponsorship, including a five-year deal on the drop tower. Of course all this now hangs in the balance, as do plans for a custom-designed rollercoaster identified as a signature attraction for phase II of the park.

Other than the park maps, little advertising or promotion had been done ahead of the soft opening period. The 80,000 people that came, including 12,000 on the Tbilisi Day holiday, did so largely on word of mouth. An official opening ceremony had been planned, either over the Christmas period or in the spring. The fact that Mtatsminda Park is a public park means that some of the rides and attractions, and certainly the catering facilities, would have stayed open through the winter. Right now though, you can’t even walk your dog there.

The Georgian presidential elections on January 5 will be crucial to the fate of Mtatsminda Park and its rides and attractions. If Patarkatsishvili becomes president, clearly its future will be secured.

If he does not, John Ellis says the Tbilisi City Government would struggle to run the amusements itself. “The park and the buildings would remain the property of the city, but all the other assets, the rides, attractions, catering etc, could be removed. If they decided to open it, technically they are running it with equipment that is not theirs. They can’t sell it on to a third party because they don’t have the rights to the rides, and can’t operate them because the test certificates belong to the owner.”

John’s theory is that the park could be allowed to open again, softly, softly, as the National Movement government proves its point. “They would be fools to keep it closed,” he concludes.

We’ll watch those polls with interest.