Cover Story - Sacoa Keeps the Focus on Family and Quality

Cover Story - Sacoa boasts 50 years in the industry; plans for its next 50 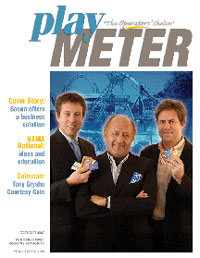 Sacoa boasts 50 years in the industry; plans for its next 50

It was 1957 when the visionary Mauricio Mochkovsky and his son Jorge started the company, operating jukeboxes and Bally bingos in bars and sports clubs in Argentina.

Later sons Alex and Ricardo joined in, and after several years of operation, bingos were banned. In 1969 the company opened its own entertainment center in Mar del Plata, which was a huge success. This was the first Sacoa family entertainment center (FEC), before the term FEC was ever used in the States.

Jorge's sons Sebastian, Pol, and Andres later joined the business, making their mark on the evolution of a company that quickly became the largest entertainment operator in the country, with over 20 centers in Argentina.

Sebastian explained that Sacoa has become a household name in Argentina, synonymous with family entertainment. Lately this is beginning to take root in other countries as well.

In the early '90s, Jorge realized they needed a much better way to control the business, keep track of the revenue, rotate games wisely, modify prices to compensate for inflation, and avoid theft. The solution began to take shape and by 1993 the first Sacoa Entertainment store to replace the traditional tokens for a computerized magnetic debit card system went online

The system's hardware and software were developed and manufactured by a sister company, Sacoa PlayCard Systems, which initially sourced all Sacoa FECs and soon started exporting to other countries. The first overseas installations were made in 1994 and currently there are several hundred installations in 37 countries.

Sebastian explained that the PlayCard System is THE solution to optimize the operation of FECs, amusement parks, and arcades. It uses a rechargeable magnetic debit card with centralized management from a remote corporate office.

The player buys a card with the amount of credit desired. Then, to play a game or activate a ride turnstile, he swipes the card through the reader. There is no chance of customers or cashiers cheating the operator or other customers.

Sebastian added, "We developed the whole thing, software and hardware. The date we made history was March 1993 when we installed the PlayCard System in one of our centers to evaluate customers' reactions and to make sure it was working properly.

"It worked better than we dared dream and the best part was that collections went up 30 percent. We saw that and asked ourselves what kind of magic was going on. It turned out that no magic was involved, just the use of the correct tool to run the business at peak efficiency. We were so excited and anxious to install the system as soon as possible at all of our centers around the country that we completed the job in less than a year. Sure enough, revenues rose at each venue that got the new system.

"We had another surprise: At certain locations where there was heavy competition we saw a rise in revenue of up to 100 percent. I'm talking about an area of about six or seven blocks with eight or nine amusement centers. Again, it seemed like magic when our slice of the cake grew."

Sebastian told us that it was an advantage for Sacoa to have its own locations to test the system. "Nothing replaces having your own centers to test the product. You can see the results immediately. We can develop new features and see if they are good because we are experienced operators ourselves. If the feature needs tweaking or modification we can always make a new version. You can't do that if you don't have control over the centers."

He added that being operators brings customer operators a sense of trust and comfort when contemplating the use of the PlayCard System. "We have a high quality product backed by a prestigious company with an exemplary track record. We show prospective customers real-life cases that demonstrate how quickly they can recover their initial investment. We also point out some of the operational possibilities open to them with a system like ours, which are completely impossible to achieve without one. None of our customers have been disappointed."

In 1994 Sacoa sold the system to its first customer, who operated in Brazil. In 1995 one of the most popular restaurant/FECs from the United States bought the card system for one location and was going to test it for six months. After just three weeks the owner called Jorge and wanted to have the system installed in all of his stores. Sacoa installed the system in eight stores in just three months. That chain now has more than 40 centers and are all using the PlayCard Debit Card System."

In fact, Sebastian said that nearly everyone who tried the PlayCard System in one location came back for more. Every custom development made for a particular customer is then made available to all customers. Such has been the case with party programs, e-tickets, redemption/inventory control programs, etc.

The PlayCard Debit Card System which for years has increased revenues for hundreds of locations in a number of countries now has another advantage: wireless operation. Sebastian noted that one customer saved over $16,000 in a 100 game center because they did not have with the hassle of running wiring and now they can change their layout as easily as moving furniture around.

The wireless version makes economic sense for any kind of FEC or outdoor park. "It's never been easier to switch to a card system. I think operators are ready for this but are a bit reticent if they really haven't had the opportunity to glimpse the 'inside story' or the level of flexibility and control that you can achieve with a cashless system," noted Sebastian.

From Mauricio's and Jorge's vision, Sacoa Entertainment and PlayCard System have evolved from the early days to a three-generation family business with 650 employees. There have been over 400 PlayCard System installations all over the world.

According to Sebastian, "Over the years we have garnered a seemingly loyal following among our competitors. Our innovative features seem to always find their way into other companies' specifications. We are flattered."

Sebastian talked about the fourth generation waiting in the wings for their opportunities at Sacoa. However, that may be awhile because they are likely more interested in watching cartoons right now. Sebastian has a son Ezequiel, who is three, and a daughter who they will name Victoria when she makes her debut to the world sometime this month; Pol has a daughter Martina, who is five. With the advances in technology and the talent already seen in the company, we can't wait to see what happens 20 years from now!


The Vulqano Park project
In the operations field, besides managing its wide chain of FECs in Argentina, Sacoa went abroad and partnered in the operation of Vulqano Park, part of a major touristic destination in Quito, Ecuador, called the TeleferiQo de Quito project (www.teleferiqo.com).

The 200,000-square-foot park includes 30 rides, a central midway building with a food court, an arcade, and a special events room.

Pol Mochkovsky, CEO of the project, said, "This was a great experience for us. We designed the concept; selected the rides and games; and set up the whole amusement park with the valuable knowledge of our engineers, technicians, and managers."

This is the first permanent amusement park in Quito; since it opened its doors in summer 2005, it has changed the way Ecuadorians have fun. Pol added, "We have just ended a great summer season. Using the debit card system we have introduced several cross-promotions with major local retailers that resulted in increased customer routing and brand recognition. In a very short time Vulqano Park has become one of Quito's most important entertainment options."